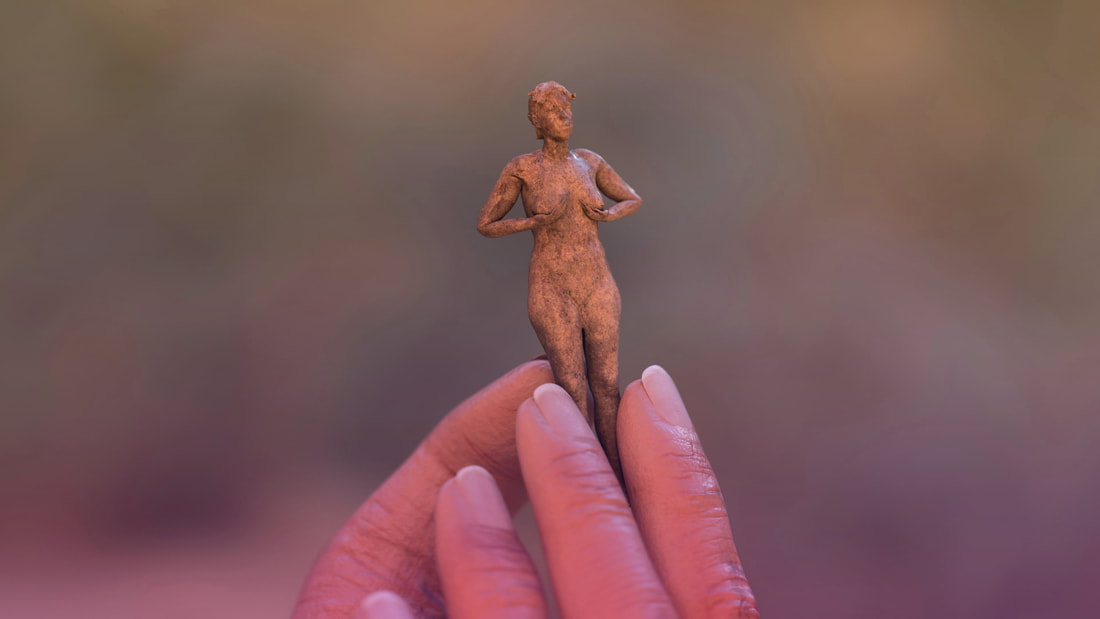 Ruth Patir, Marry Fuck Kill, 2019, HD video, 3D animation, 13:15 min (still)
Marry Fuck Kill is a cross generational 3D documentary by Ruth Patir that reimagines fertility goddesses from ancient times as real-life women, starting with her own mother, by animating them as a digital, moving sculptural bodies. The film deals with the intricacies of the historical representation of the female form and the passive and willful clichés and misunderstandings that surround them.

Developed from an earlier project exploring and critiquing the Israeli general Moshe Dayan, his relationships and his legacy, the ancient sculptures that form the basis of Marry Fuck Kill are all from his personal collection which is a key part of Israel's national collection today.

“Working on the Dayan film I realized the extent to which the digital world of animation, 3D and AI is riddled with gender and racial biases and I felt a strong urge to create works that expand the boundaries in the field.”

To produce the film, Patir learnt the technology commonly used for computer games and marvel movies to record her and her mother’s movements and transpose them into animated ancient female figurines, from the time of the Israelites first temple (528 BC).

“In my work, I repurpose the technology for documentary purposes, breathing life into these clay sculptures, whose hands have been holding their breasts for thousands of years, and liberate them from their stagnation.”

After an opening sequence in the museum, the artist relocates the figurines in a local landscape, increasing the sense of dissonance between past and the present, static and the animated, oppression and freedom. Meanwhile the repurposing of animation technology and the frank and intimate dialogue between mother and daughter creates a space where different feminist perspectives meet.

Exploring questions of female power in the #metoo era, contemplating the notion of “girly” desires and the dynamics of gender and sexuality, the work plugs into the seminal essay of feminist writer Donna Haraway A Cyborg Manifesto (1984) by asking if the digital image could refuse to recreate humanity’s wrongdoings and act as illegitimate offspring, unfaithful to their historical origin.

Through the medium of fertility sculptures, the conversation between mother and daughter also brings two different generations and visions of feminism into dialogue. As a successful businesswoman Patir’s mother served as the first woman to be elected as officer to the International Standard Organization (ISO) in Geneva, where she articulated environmental and social responsibility standards, and as a retired CEO, women's rights activist and post-menopause grandmother she plays the part of the film’s trojan horse. “As she isn’t as enthusiastic as I am about the current female liberation zeitgeist, our dialogue becomes a debate between second-wave and third-wave feminism.”

The film is as critical as it is fun, the dialogue layered with sarcasm and closing with a karaoke from the musical Grease performed by a 3D scan of the artist as the so called “Venus of Birchat Ram” - the most ancient figurine to be found anywhere to date.

Ruth Patir (b.1984 in New York, USA) is a multimedia artist and filmmaker whose works deal with gender paradigms and power relations, often mixing historical and national narratives with the artist's own autobiography. In her works Patir expands the boundaries of representation in the digital age, working against the gender and racial biases that populate the field of animation, 3d simulations and Artificial Intelligence. She is the recipient of the “Young Video Artist” prize from the Israel Ministry of culture (2018) and she is currently a member of the Artport Residency program sponsored by the Arison Foundation (2019-2020). Her film Sleepers (2017), awarded The Experimental Cinema and Video Art Award at the Jerusalem Film Festival, is a contemplation on the dream-state as a site for political intervention and it was commissioned for Danspace Projects New York and ironically presented during president elect Donald Trump’s Inauguration. Patir’s work has been exhibited at venues such as CCA Center for Contemporary Art – Tel Aviv, Ashdod Art Museum, PrintScreen Festival, Petach Tikva Museum of Art, Anthology Film Archives – New York, MoMA Museum of Modern Art – New York, Kav 16 Gallery – Tel Aviv, and Flux Factory New York among others. The artist holds a BFA from Bezalel Academy of Art and Design Jerusalem, and an MFA from Columbia University in the city of New York.