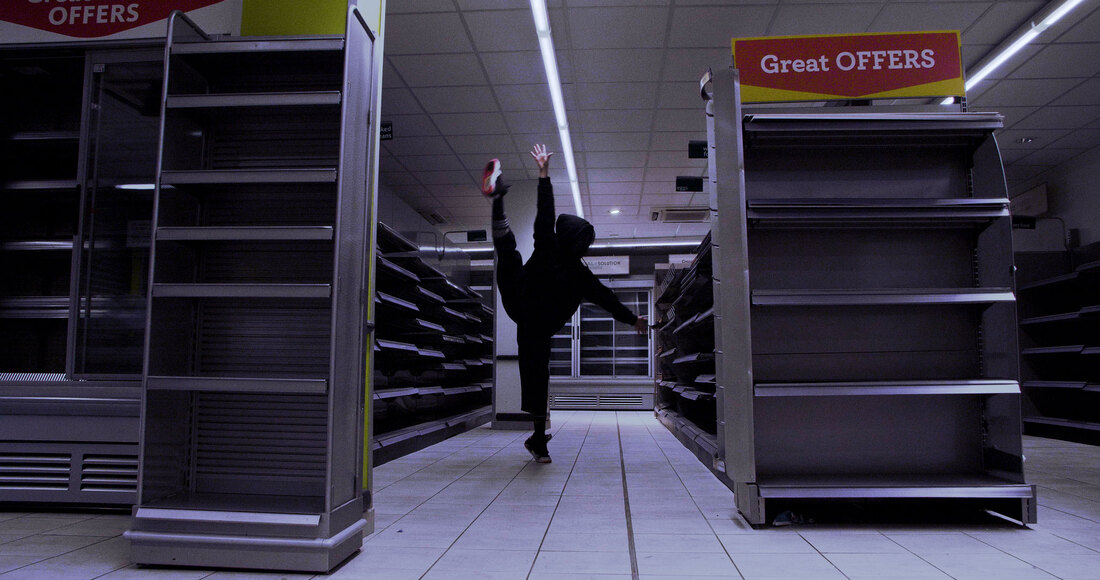 Within the film the artist uses the supermarket as a space to critique contradictions within modern society.  Whilst the system of the supermarket is generally assumed to offer consumers a vast array of choice in purchasing goods and services, the choices are rarely substantial; a handful of many-faced corporations laid out across clinical environments. Additionally, the politicisation (and violence) upon the black body is explored in the work through choreographed movements performed by dancer Kanika Skye-Carr.

The work is an artistic act of counter-surveillance, playing on the all-seeing eyes and repressive structures that have become the norm in consumer culture and retail environments.
Extending the film’s consideration of the black body, the new print series “Speckle” place the Black British experience in further context and recent history. Within this body of work family photos have been remixed so that the faces of each and every black person have been blotted out with graphic black circles emblazoned with precise red lips – an aesthetic that the artist describes occurred as a result of a mesh of experiences; the artist’s direct familiarity with racism as a young child growing up in East London in the 1980s/90s both in school playgrounds and on the street and in everyday mundane icons and advertisements. There are many examples but the most prevalent in his childhood experience was Robertson's Golliwog mascot, used to help market the jam that he encountered in supermarkets. Despite being directly inspired by the aggressively racist Blackface’ minstal shows that were popularised in the United States, the Robertson’s mascot was used as an official trademark for the company from 1910 until it was finally retired at late as 2002.

The booth can be visited online at viewingroom.frieze.com between 9 and 16 October 2020 (Preview 7- 8 October ) and in person as an extended presentation at 12 Piccadilly Arcade, SW1Y 6NH for Frieze week, 7 - 11 October, 12 - 7pm (no appointment needed).
Opposite the Royal Academy and among the grandeur of Mayfair & St James, Achiampong’s work sits in stark contrast to these surroundings. Carving out a place in this historic luxury shopping arcade, Achiampong’s work opens a portal to a disused supermarket on London’s outskirts. The story of the disenchanted played out inside that abandoned space is a legacy of the empire that built London’s wealth and the systems that maintain it.


What a complicated and loaded subject is colour. In art this has been politically so ever since the great German poet and author of Faust, Goethe, came to his own scientific conclusion that ultimately the perception of colour was subjective. His findings – in contrast to those of Newton who thought the spectrum was an objective set of facts – he indeed regarded his greatest life achievement. However, Goethe nor Newton in fact investigated as such black or white. For them these were not even colours as such.

In the meantime, from the end of the nineteenth century and throughout the twentieth, down to our own day, these two absolute opposite ‘colours’ have taken on endless nuances of meaning. From Malevich, who beneath his famous Black Square painting of 1913 seems perhaps to have scribbled the words
‘Battle of the negroes in a cave’ – shades of Plato’s cave perhaps where the blackness of the shadow ruled – to Ad Reinhardt, who wrote of his famous black paintings that: ‘they represent the victory of the shadow of darkness and peace over the power of light and evil’. That was back in 1957.

Now, in the year 2020, Larry Achiampong, a young artist born in London of Ghanaian heritage, is exploring the ‘bothness’ of his identity, which centres his blackness, while pointing out the historically conditioned blind spots of European modern art. Achiampong is already gathering a considerable reputation, as in an already rich body of work he has set out his own highly personal art discourse. This is in a context where of course throughout the world many artists and others are engaged in a dialogue that the intelligent world is having about the complexities, injustices and paradoxes that have arisen as a result of the histories of colonialism, displacement and migration over centuries, decades and into the present.

Achiampong is equally engaged in his Ghanaian heritage and with the cultural realities of growing up as a young black male in East London, both of which realities contain their own cultural aesthetic dynamics, which sometimes clash and sometimes fuse together. His work as an image-maker in many different media, from collaged painting, photography and video, sound and music too, sometimes but not always working with collaborators of different backgrounds as equals, engages with individual ‘dramatic’ situations that address issues of blackness and sometimes whiteness that cannot fail to engage viewers with their seriousness, visual poetics, and the pleasures of being alive but also inherent tragedy. These lie at the heart of all his work, often simultaneously.
In his presentation for Frieze 2020, taking place, inevitably, online he presents a new video piece titled Beyond the Substrata. Set in an abandoned supermarket – once surely overflowing with (un)necessary food and drink for human consumption – eerily like the now many redundant high street spaces of consumerism – that becomes a stage for a dancer (Kanika Skye-Carr) cloaked from head to toe in black fabric (Skye-Carr is a person of colour, but this is not obviously so in the work). The dancer’s only audience is the black Malevich-like square on the surveillance screen overhead as she choreographically navigates the aisles with their empty shelves before reaching the abandoned check-outs with nowhere further to go.

The film is accompanied by five new C-type prints from the series ‘Speckle’ which develops an ongoing project. The colourful archive images are all sourced from his own extended Ghanaian family photo albums, and recall by virtue of their insistent directness the imagery of the great Mali photographer Malick Sidibé. Except in Achiampong’s series each face is erased by a circular ‘blackface’ motif with red lips.  These transform the beautifully-dressed figures – the girls wear wonderful Ghanaian patterned fabrics, possibly manufactured in Manchester (they certainly were once and exported to Ghana; another curious moment in the colonial story) into surreal ‘golliwog’ like presences. These not so long ago were considered by some as perfectly acceptable images on jam jars, or as precious children’s dolls. Now these images are regarded alongside many other visual and linguistic clichés about ‘the other’ as unacceptable, just as no white actor today ‘blacks up’ to play Othello.

It still though remains an issue as to the ways many of us, for example, when going up and down the escalators at Tate Modern (remember the controversial, nearly cancelled ‘Cloud’ performance by Achiampong in 2013), actually regard people of colour and their individuality as they inhabit fundamentally historically white Western cultural spaces, here specifically in British and London society. Why are people of colour disproportionately occupied with vital, essentially dignified and difficult but invisible low paid service jobs, such as cleaning or acting as guards in our museums? This is certainly one of the many central questions that Larry Achiampong addresses in his work with huge cultural awareness; in other words, with a beautiful sense of history and art history, both forever intertwined, as well as refinement in all he produces for us and in the works in this new special presentation.