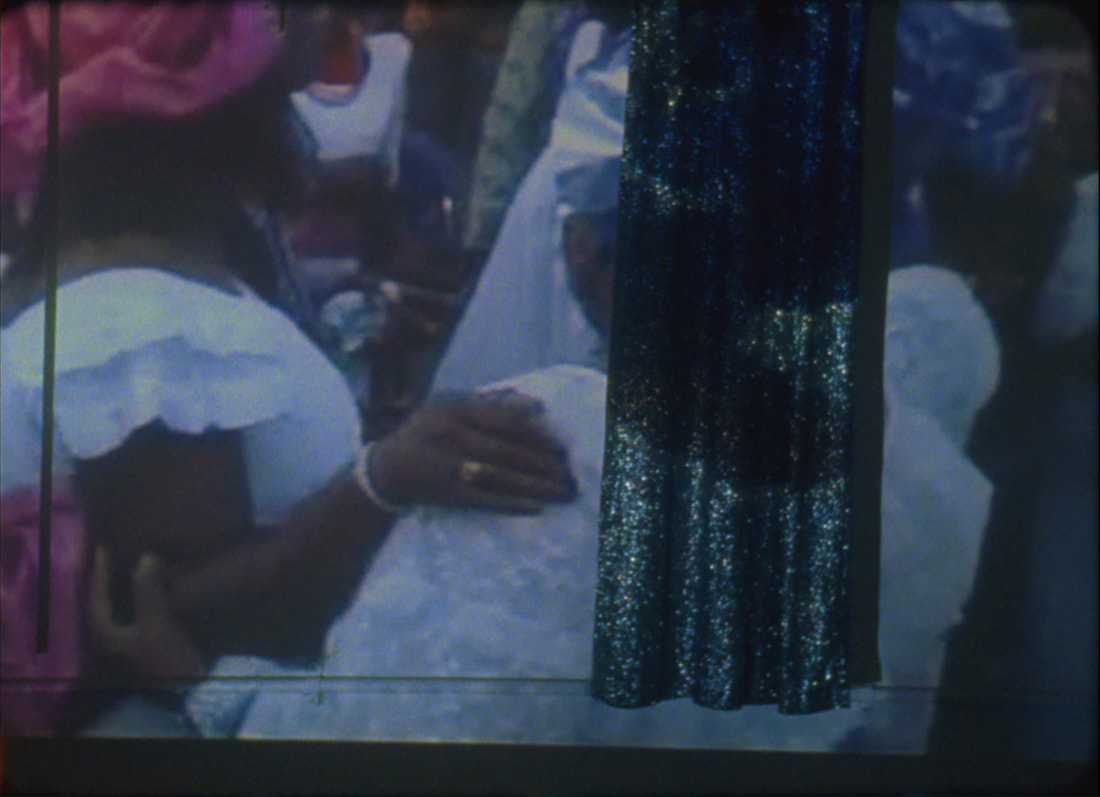 The energy, rhythm and vibrancy that draws us into the film is universal, enticing, nostalgic. While the recurring motifs of the disco ball and the sound system speak to club spaces across the world, the artist carves out their own individuated narrative, drawing on deeply personal archives, spliced with the footage of Sandi Hughes—a feminist filmmaker, DJ and poet whose videos from the 1970–90s record Liverpool’s nightclub scenes, community events and national political protests. A considered intertextuality emboldens the work, creating new and relevant intersections within contemporary culture. Though certain details are personal, moments of anecdotal refrain, it is the broadly relatable recurring imagery and rhythms underpinning the film, that grants the audience access into a potential place of greater understanding. Marginalised narratives of blackness, queerness and their darker counterparts, racism, homophobia and sexism are unapologetically placed next to one another, exposed, bar by bar, beat by beat.

The spoken word is our guide, leading us back through heady, joyous moments of celebration, visceral traumas and mourning, all the while anchored by the speaker body that succeeds or accompanies those moments. To orientate yourself in the flashing lights and twisting bodies of a darkened club, you use your eyes but how much do you rely on your ears? You know where the speakers are, immovable, totemic stacks from which the sound emanates and vibrates, and from there the rest of the space is mapped out – never entirely clear, but instinctively navigable.

Music, dance and clubs have always had mainstream visibility, but they are also the currency of subcultures, the exchange and connection innate within marginalised communities. Together they have repeatedly created spaces of comfort and escape for people who have been othered and erased by the mainstream. Through these non-conforming existences, the mainstream has repeatedly been breached but for now these rightful incursions remain exceptions to the rule. Marginalised narratives. People.

Though the work draws from nostalgia, a fluid temporality connects it to the present and future, a transcendent quality evading any sense of stasis or rootedness. Right now, many of these spaces are under threat, as mingling bodies are reasonably prohibited in the interests of health. Left empty, these spaces are hounded by landlords motivated by need and greed and the many shades in between. When this is over, what spaces will be left, what new spaces will be created, what will connection mean?

This film has been made with a package of support from BFI, no.w.here and Wellcome Trust as part of the 'Queering love, Queering hormones' project and a grant from Heritage Lottery Fund as part of the Rewind/Fast Forward project.